Raina sat counting the money sent from her husband, Ander. Like his last paycheck, it wasn’t much, perhaps barely enough to cover their expenses for that month. She looked up from the meager earnings and out to her field. Perhaps if she imagined hard enough, the field would be full of growing crops to sell. But, try as she might, Raina’s imagination alone wouldn’t bring in the money she desperately needed.

Farming for Her Life

Most of Raina’s life had been dominated by poverty, for she and her family belonged to one of the most underprivileged people groups in the region. They bore constant discrimination, abuse and deprivation, which had kept many of Raina’s people trapped in misery for generations. Despite laws put in place to protect Raina and her peers, they continued to endure harsh treatment and even harsher living conditions. Growing up without many of the opportunities and benefits other children possessed, Raina didn’t have much chance at a future without poverty. 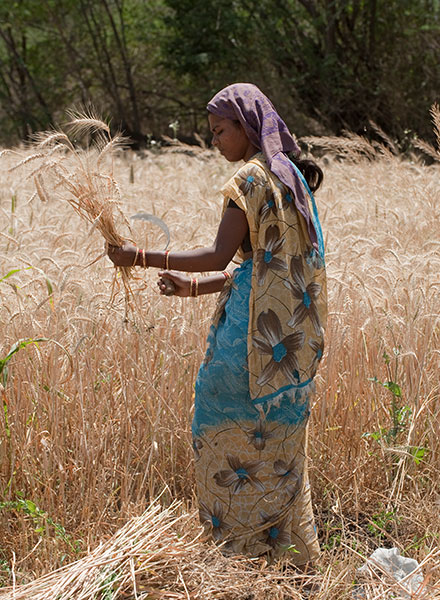 Like the woman pictured, Raina labored in her field, growing what she could to fight off poverty.

Children who grow up in poverty—like Raina—are more than three times as likely to be poor in adulthood.1

But there had been one bright spot in Raina’s childhood. Thanks to her parent’s hard work, Raina had been able to attend school through the 10th grade, which was an opportunity many impoverished children didn’t have.

Children who grow up in poverty—like Raina—are more than three times as likely to be poor in adulthood.

For every year Raina stayed in school, her chances of sinking deeper into poverty decreased by 9 percent.2 The more education she received, the more likely she was to break free from a cycle of poverty. A report from UNICEF indicates that had students living in low-income or developing countries learned basic reading skills, 171 million fewer people would be living in extreme poverty.3 No matter how humble an education one might receive, it could still help prevent destitution.

When it became apparent to Raina that her parents couldn’t afford to provide her with higher education, she discontinued her studies. No matter how much she wanted to have those certificates of completion in her hands, it wasn’t financially possible. Instead, Raina joined her parents in doing what they had always done: labor in the fields, earning money to help put food on the table.

After Raina married Ander, she continued to farm, supplementing Ander’s income with her own. In search of better job opportunities, her husband lived hours away in a neighboring city, working in a carshop. Despite his long hours, the pay he received was minimal.

Had Raina finished her education, she might not have had to depend on the field for her and her family’s survival. Now, all she had to pass on to her children was the same poverty she grew up in, perpetuating the cycle of impoverishment and hopelessness.

However, hope had not completely abandoned Raina.

Providing a Way Out

From time to time, Raina would join her parents, who lived nearby, at a church lead by GFA pastor Taedin. The pastor knew of Raina’s burdens—and knew there was a way to help her and her family climb out of poverty’s pit.

Like many other GFA missionaries serving in impoverished communities, Pastor Taedin looked for ways to alleviate people’s physical needs while bringing them the healing love of Christ. Because of the generosity of people across the globe, he knew he could provide people with Christmas gifts that would give them a dignified way out of poverty. Sometimes those gifts were rickshaws or sewing machines; other times they were in the form of squawking chickens or cows. For Raina, it was the gift of a goat! 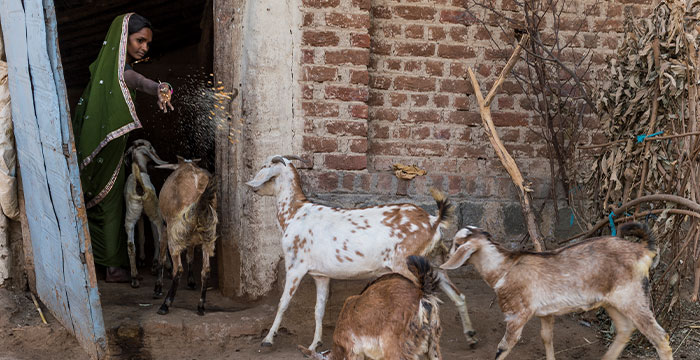 Goats, and the benefits they bring, enable impoverished families to better provide for themselves, and possibly even break free from extreme poverty.

A report compiled by the International Fund for Agricultural Development found that small livestock—such as goats—can be better than larger livestock at helping rural impoverished farmers escape poverty.4 Goats provide the same economic benefits as larger livestock, such as aiding in tilling fields, providing manure for fertilization of crops and improving food security through milk, or meat, if the need arises.5 These benefits from small livestock come at a much reduced cost, as they require less money to feed and care for than their larger counterparts.6 Small livestock and their offspring can also be more easily sold for a decent amount, which means impoverished families have the ability to meet their most pressing needs.7

As small livestock can provide nutritious milk and meat, they are boons for nutritionally deprived families.8 Reports indicate that around 149 million children under the age of 5 experienced stunted growth in 2020 because of malnutrition.9 Raina’s son could have been among that number, but thanks to Raina’s new goat, that would not happen.

Finally, the goat’s manure could be used as fertilizer to bolster crop growth, which means a more bountiful harvest to sell in the market—and more income that can help Raina and her family survive poverty.10

“I wanted to keep goats [in the past],” Raina said, grateful. “But I could not, because of my poor status. … I am very happy to receive a goat. … I will earn enough to maintain my family.”

Cycles of Poverty Yet to be Broken

Nearly 65 percent of poor working adults depend on agriculture as their primary source of livelihood,11 much like Raina. Providing individuals and families with livestock enables rural recipients to better earn income, provides a safety net in times of crisis and offers much-needed nutrition.12 Entire communities still live in a near-constant state of deprivation, wondering where their next meal will come from. 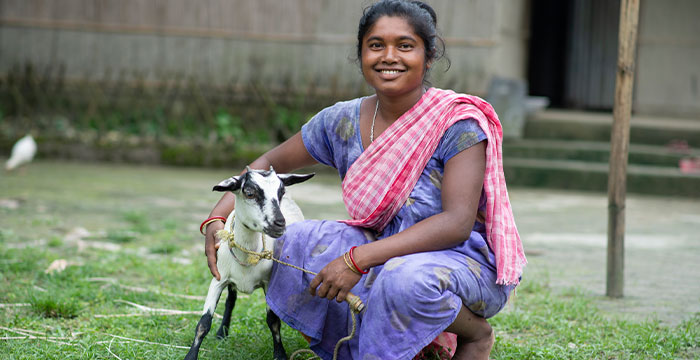 With her new goat, Raina (not pictured) will be able to better provide for herself and her son.

You can help alleviate their poverty and give them hope! By giving toward animals, such as goats, you can provide poor families with the means to increase their income and free them from a life of despair and destitution, while at the same time help them understand God’s love for them.