The Bastar Region, covering some 15,000 square miles in southern Chhattisgarh, is considered a paradise for tourists, with deep forests covering 75 percent of the region, penetrated by flowing streams, hills, caves and waterfalls. Visitors are also attracted to the region’s exotic handicrafts, which include everything from statues of the local gods to exquisite furniture.

But for its 2.7 million inhabitants, many of them tribals, it is also a land of subsistence farming with numerous traditional religious festivals breaking up the calendar. Christianity is a minority religion dating from the time of the first Western missionaries.

Only about half of the people can read or write, and outsiders are prohibited from visiting some tribal areas in order to preserve their primitive culture. 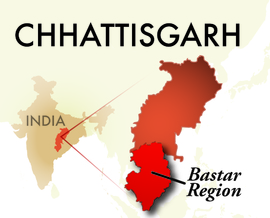