There is rich cultural history in the Bhubaneswar Odisha Region, including both Odisha’s capital city along with one of the oldest cities in India. Tourists come to see prehistoric rock paintings, palaces and an ancient lighthouse along the coast.

This area is also a religious hub, and it is well known for major religious festivals. Very nationalistic, this region was home to several revolts during India’s struggle for independence.

Although mines for iron ore, bauxite, gold and limestone abound, this region still depends on agriculture and is very poor. Several tribes call this region home, some prominent for their craftsmanship in weaving, silver work, stone sculptures and paintings.

The weather can be extreme in both summer and winter, and the area near the Bay of Bengal is prone to flooding. Wildlife refuges in the Bhubaneswar Odisha Region house tigers, leopards and elephants—even a crocodile sanctuary! 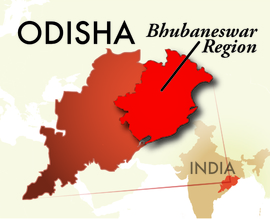