This region encompasses the central coastal strip of Andhra Pradesh and covers some 10,500 square miles. Dominated by the Telugu-speaking Kamma caste, its 16 million people include Muslims and Christians as well as the majority Hindus. They live in more than 7,800 villages and 10 cities.

The people of Central Andhra Pradesh must deal with a hot, humid tropical climate. Although the majority of the people live in rural villages, many migrate to the cities. They relocate hoping for a better life, but many end up with menial jobs and live in makeshift slums. 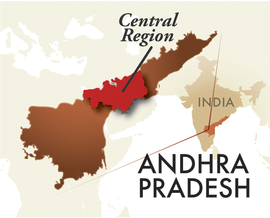