The East Punjab Region contains the state capital of Chandigarh. This city was planned by famous architect Le Corbusier, who also designed the U.N. building in New York. Chandigarh is a modern, clean and beautiful city that draws admirers from around the world.

Outside of Chandigarh, the majority of the region’s people are engaged in agriculture. And although the region has traditionally been a major producer of wheat, rice, sugarcane, sunflowers and other cash crops, recent droughts have hurt the industry. The area’s electrical supply has also suffered because it relies heavily on the Bhakra Dam for hydroelectric power.

Punjabi is the major language spoken in the region, but Malwi, Hindi and English are also commonly spoken. 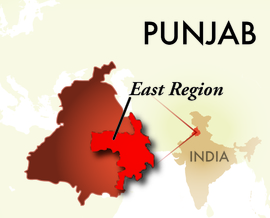