Situated in western Himachal Pradesh, the Kangra region contains valleys, streams, mountains and lush tea gardens. The only rock-salt mines in India are found there.

Most of the people are tribal. The Gujjars travel from place to place with their cattle. The Gaddi people, also nomadic, live at high altitudes. Heavy snows and avalanches cut them off from the outside world. Dharamsala, the city to which the Dalai Lama fled when the Chinese invaded Tibet, is known as “Little Tibet.” Monasteries and temples both exist here.

Christianity came to this region in the 18th century. 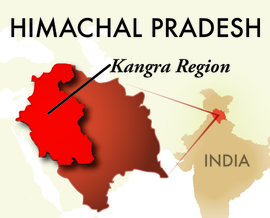