The capital city Kolkata (Calcutta), nicknamed “The City of Joy,” is the hub of the Kolkata West Bengal Region. It was here that pioneer missionary William Carey and Mother Teresa and her Sisters of Mercy spent their lives caring for the people.

Founded by an agent of the East India Company, Kolkata was British India’s showpiece city, drawing the rich and famous as well as fortune seekers. Classical culture was already thriving in this region, as Indian kings had been avid patrons of art, dance, poetry and music. Kolkata was the capital of India under British rule until 1912, when it was then moved to Delhi.

As the eighth-largest metro area in the world, Kolkata remains politically influential—even though it has the world’s lowest standard of living. The city has vast slums and more than 1 million homeless residents.

The Kolkata Region is home to 9,000 villages, with lifestyles varying from businessmen to tribal fishermen who ply their trade in the Bay of Bengal. Agriculture is the region’s main livelihood, with bountiful crops such as rice, jute, potatoes, coconut, wheat, chilies and canola.

Baijis, rare river dolphins, can be found in the region’s rivers. The famous saltwater mangrove Sunderbans are also home to thousands of wild Bengal tigers. Just past the Sunderbans in the Bay of Bengal lie hundreds of extremely rural islands, with people living in some of the most primitive conditions imaginable.

The great contrast between the warm, dry north and the cool, humid south creates the weather pattern that leads to devastating cyclones in this region. 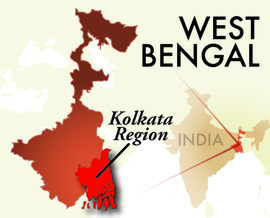