The Malda West Bengal Region lies at the base of the majestic and powerful Himalaya Mountains. Encircled by rivers, the fertile land produces mangoes and mulberries, and the area is also an agricultural trade center for rice, jute and wheat.

Ruins in this region reveal a rich cultural heritage. The area has seen three eras of glory as the capital of ancient dynasties—one Buddhist, one Hindu, one Muslim.

An English factory was established here in 1771, which served as the beginnings of the modern area. Today the historical colonial areas are tourist destinations.

There are 7,000 villages in the Malda Region. The area’s two main tribal groups are the Bengalis, classically cultured and powerful, and the Santals, considered India’s most primitive tribal group. A minority in this region are the Mahalis, a tribe of bamboo craftsmen, which is slowly shrinking in number. They have fascinating customs, including tattooing a person’s name onto their hand. 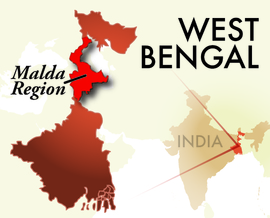