Most of the region’s people are members of the Gond tribe. They live in more than 8,000 separate villages. Some also live in the area’s 51 towns and cities.

The people who live in Bhopal contend with immense poverty and crime. Much of the poverty is concentrated in the more than 300 slum areas that form a ring around the city.

The tribals still follow their ancient culture, hunting and fishing for food. But they also farm small plots of land, growing rice, corn and wheat, and gather forest products to sell in village markets. Some are craftsmen who create metal goods.

Hinduism is the major religion of the area, mixed with tribal beliefs. Hindi, Urdu and Parsi are the major languages of non-tribals. 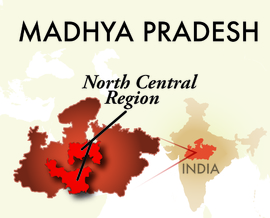