Old Goa, located in the north region, was once the capital city. It was populated by 200,000 people, but after epidemics of cholera and malaria broke out, the city was virtually abandoned. Only beautifully constructed Portuguese-styled buildings and cathedrals remain, which were deemed World Heritage Sites by the United Nations Educational, Scientific and Cultural Organization (UNESCO).

Today, North Goa is a tourist haven of golden beaches, palm trees and balmy coastal breezes. The region’s residents grow rice in the fertile soil. They also raise coconuts, work in the tourism industries or man fishing boats to earn a living. Furthermore, the region is home to a few iron and manganese mines.

One of the tourist attractions is the Basilica of Bom Jesus, a shrine honoring Jesus as an infant. The basilica contains the mortal remains of St. Francis Xavier, co-founder of the Society of Jesus and Roman Catholic missionary who landed on Goa soil in 1542. 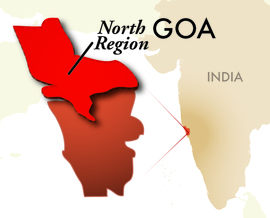