North Kerala is an area of extreme beauty, with lush forests, fertile river valleys and sandy beaches attracting many visitors to the area. Its residents live in 485 villages and more than 26 towns and cities.

Most of North Kerala’s inhabitants are engaged in agriculture and live in an area blessed with adequate rainfall. In fact, the state of Kerala receives more than 118 inches of rain per year. Keralites enjoy moderate temperatures, with highs ranging from 68 degrees in the mountains to 90 degrees on the plains. Major crops include coffee, tea and spices like pepper and cardamom.

Muslims make up the majority of the people in the North Kerala Region. 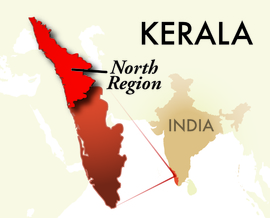