Some 80 percent of Raipur’s people struggle to sustain themselves through farming. And although their lives are difficult, their religious traditions are strong.

Raipur is a place filled with religious activities. Three of the region’s mountains are pilgrimage sites: One is sacred to those who worship the goddess Bombleswari. Another is a place of Buddhist pilgrimage. And a third has been designated as a place for Catholic prayer and worship.

Chhattisghari and Hindi are the two main languages spoken in the state, but many also communicate in their own unique tribal languages. 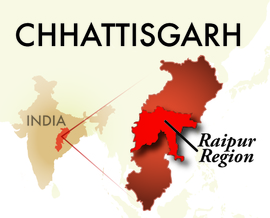