Known as the commercial capital of Odisha, the Sambalpur Odisha Region has multiple iron, steel and cement manufacturing centers. Industry is a main source of income, along with agriculture and the weaving of traditional tribal handicrafts.

The main people group here is the Mundas. They are jungle people, known as hard-working and brave, but addiction to homemade rice alcohol is a trait of their communities.

Surendra Sai, a renowned Indian freedom fighter during the time of British rule, was from this region. Devotion to India and to traditional gods and goddesses runs deep, and religious shrines draw people from near and far.

This region recorded the second-highest temperature ever in India. Summer and winter are both extreme, making living conditions uncomfortable at times and even deadly for the weak and the very young or old. 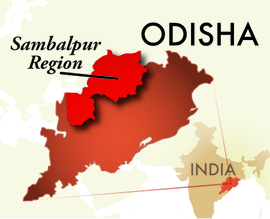