Nestled in the eastern part of the state, the Shimla Region contains snow-fed glaciers, high mountain peaks, picturesque valleys, forests, deserts, brisk streams and tranquil mountain lakes. More than 50 species of medicinal and aromatic plants are grown there. Village witch doctors use some of these plants to prescribe herbal treatments.

Shimla, Himachal Pradesh’s capital situated in the northwest Himalayas, is a tourist’s delight with its charming resorts, breathtaking mountain views, waterfalls and scenic hills. Shimla’s seven hills showcase a variety of architectural styles, including temples, educational institutions, a hotel and a museum. The yellow-toned Christ Church is said to be the second-oldest church in northern India. In another part of the region, some Buddhist monasteries date back more than a thousand years.

Christianity came to this region in the 18th century. 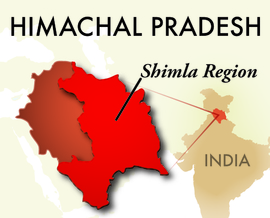