The South Kerala Region is the most tropical part of the state, with beautiful beaches, palm trees and large rubber and tea plantations. It is also a tourist centre, with luxury houseboats plying its lush inland waterways.

Less than half of South Kerala’s population are engaged in agriculture, which is unusual for India. Many work in manufacturing of coconut products. Others make handcrafts for the markets. Millions of others work in banking, communications and the tourism industry. Thiruvananthapuram, the state capital, is located in the region’s southern-most district, and its elaborate Hindu temples attract visitors from around the world.

The people are well-educated, too. The Kottayam district has the distinction of being the first in India to achieve a 100 percent literacy rate. And although Malayalam is the main language of the state, English is common, too.

South Kerala has a large and historic Christian population, although the majority of the people are Hindus. 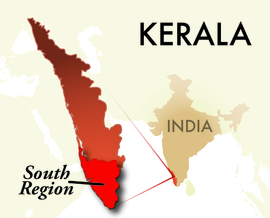