In South Rajasthan, the people live among dense bamboo forests and rocky hills. The climate is more moderate in this region than in other parts of the state, so many people grow corn for a living. Although farming is a major source of income, many people in South Rajasthan also raise cattle and harvest bamboo and teakwood from the forests.

Rainfall levels vary from year to year, and during times of drought, the entire population struggles. When the rains fail to come, many people are forced to temporarily relocate to another area and work as day laborers. 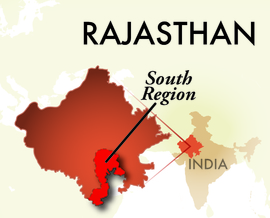