The Southwest Punjab Region is home to Amritsar, the holy city of the Sikhs, and its famous Golden Temple. So it is no surprise that the vast majority of the people living in this region are Sikhs.

These Sikhs are divided into two groups, the lower-caste Jats and the higher-caste Mazhabis. The Jats are mainly involved in agriculture. The Mazhabis are labourers, mechanics or technicians. Both groups speak Punjabi.

Agriculture forms the basis of the regional economy. Buckwheat, barley, wheat and rice are major cash crops, while sugarcane and a wide variety of vegetables are also grown.

Temperatures in the region are extreme, ranging from below freezing in the winter to 117 degrees Fahrenheit in the summer.

Although Sikhism is the dominant religion, Christian schools, hospitals and other institutions are held in high esteem. 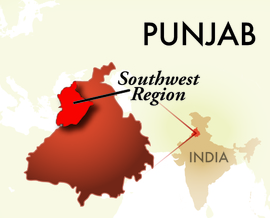