The West Tripura Region, located in the northwest part of the state, is home to Agartala, the state capital city, and its famous Ujjayanta Palace. Built by the ruling Maharaja Radha Kishore Manikya in 1901, the palace now houses the state assembly.

While Bengalis are the largest ethnic group in the region, there are also large populations of tribals, including Tripuris, Jamatia, Reang, Noatia, Koloi, Murasing, Chakma, Halam, Garo, Kuki, Lushai, Mogh, Munda, Oraon and Uchoi. The region’s indigenous people have an autonomous tribal council in the city of Khumulwng.

Many of the tribes follow Shaktism, a hybrid of Hinduism and tribal religions that was the state religion under the Tripuran kings.

Most of the people are engaged in agriculture and live in some 650 villages and two major towns. 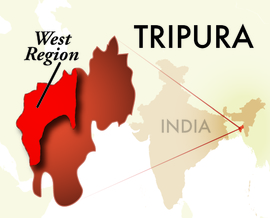